Hit enter to search or ESC to close
News

Bridging divides: Working together is the only path forward

For over twenty-nine years, a single twenty-five feet long bridge across the Windbelt Lagoon served as the only way in or out for twenty-five households in Genda Road, Fishing Pond. Over the years, Sea blast and salt-water inundation of the Lagoon degraded the steel structures and subsequent wood planking. The residents’ fears were realised when, in late 2018, the degrading structure and the massive flooding events that year left the bridge almost impassable. 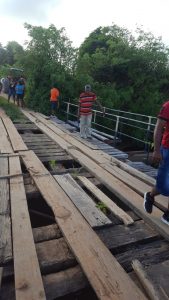 The villagers of Fishing Pond did not let these matters rest. For years they have reached out to their Representatives, as well as the Ministry of Rural Development and Local Government. In February of 2016, the residents invited the Honourable Minister of Agriculture to visit the village and get a first-hand view of the derelict bridge and the danger faced by residents, farmers and buyers coming into the farmlands to purchase produce to sell at markets. The Minister informed them that the bridge was dilapidated beyond repair and would have to be replaced with a Bailey bridge, making an oral promise at that time, to see to it that the bridge would be replaced.

After two years of requests for assistance back and forth, the Member of Parliament for the area further engaged the Minister in Parliament on October 16th, 2018, to which the Minister responded that he has been in talks with the MP for the area and that they were happy to report that they had Bailey bridges to assist different communities. In addition, he had also indicated that the bridges could not have been built earlier as parts were missing but were since sources. Therefore, he said, they would be coming up Cumuto/Manzanilla to assist the community. As of October 2019, no such bridge was erected.

Residents continued to improvise for their own wellbeing, placing wooden planks across the bridge which once held steel beams. As the wooden planks rot and shift, the space is patched up with new wood. However, the tireless residents of Fishing Pond realised that they had access to a more powerful source of support and assistance: their fellow Trinbagonians.

The Fishing Pond Farmers’ Association is part of the three-year initiative, ‘CSOs for Good Environmental Governance’, being funded by the European Union Delegation to Trinidad and Tobago and led by The Cropper Foundation. In this initiative, twenty-five civil society organisations are building their understanding of environmental legislation and processes in Trinidad and Tobago; determining how to better represent themselves in the process of participation in development planning; and learning how to work together to maximise their voices for environmentally responsible national development – particularly in relation to extractive industries.

As part of this initiative, the Lloyd Best Institute of the Caribbean worked with the twenty-five groups to create a sense of community – to emphasise that whatever their various communities were going through, there are others right in Trinidad and Tobago that could and would help. Through this activity, the groups undertook a series of ‘Gayaps’ coming together to work on a series of community projects in a select number of communities represented in the initiative. The Fishing Pond Bridge was one of these Gayap projects.

Over a series of four months starting in June 2019, members from other civil society organisations and communities worked with the Fishing Pond Farmers’ Association to understand the political, social and environmental factors that led to the Bridge being in the dilapidated stage it was in. Members of the Gayap  wrote letters to the Member of Parliament and the Ministry of Agriculture, used any connections they might have had to push letters along, kept up the Fishing Pond Association’s hope , until in October 25th 2019, the Ministry of Rural Development and Local Government undertook refurbishment works on the Bridge. It is hoped that this interim structure will provide access until the promised Bailey bridge is erected. 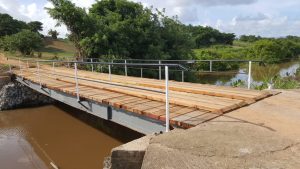 Creating a space where communities and civil society can support and learn from one another, works. As one of the participants remarked “I was taken aback when we went on site visits and we got this sense of what people are going through. I went to Asa Wright and for the first time I saw how the environment is being affected all the way back to Lopinot and it really touched me because when we go to these workshops, you go and sit there, they hand you a set of papers and when you reach home you rest it down and you never think about it again. These workshops really bring me to life because you get to see the actual things that are going on in Trinidad and Tobago.”

Another community member reflected that “The Gayap projects really brought us together. We bonded together…It was really helpful looking at the other issues that are going to face us…we [know we] cannot do it alone.”

The work continues into 2020 for the EU-funded ‘CSOs for Good Environmental Governance,’ wherein community members from across Trinidad and Tobago work together to advocate for environmental sustainability from their local communities to national levels. At the end of it all, we hope to make it clear that we are all in this together and that all sectors, government, private and civil society must work together for truly sustainable development.

By-line: Omar Mohammed is the Chief Executive Officer of The Cropper Foundation and Nicole Vallie is a Research Officer at Fishermen and Friends of the Sea. The Cropper Foundation and Fishermen and Friends of the Sea, along with their partners the Oilfield Workers’ Trade Union, the Network of Rural Women Producers and Environment Tobago, are leading the EU-funded project ‘CSOs for Good Environmental Governance.’

© 2019. All Rights Reserved, The Cropper Foundation